(Sold 2 Sep 2011) [Includes a travel photography tip too]The Medina, Sousse. As seen from the round tower (nador) of the Ribat, a fortified monastery within the Medina, Sousse, Tunisia. The building at the top hill is Sousse Archaeological Museum. Dougga, The Tell, Tunisia.Not really a lot to say about this image, it was a pretty much a simple snapshot. I've used a couple of rules of composition with it. Repetition of the building in the lower two thirds of the image and (approximately) rules of third for where I placed the horizon line. I did take a horizontal version of the scene, but in my opinion the vertical is a much stronger image. So I guess that's a good tip for those starting out in photography – take both orientations and see which works best.Here's the licencing data:Country: WorldwideUsage: EditorialMedia: Textbook – print and e-bookPrint run: UnlimitedPlacement: InsideImage Size: 2 page spreadStart: 01 September 2011End: 01 September 2036 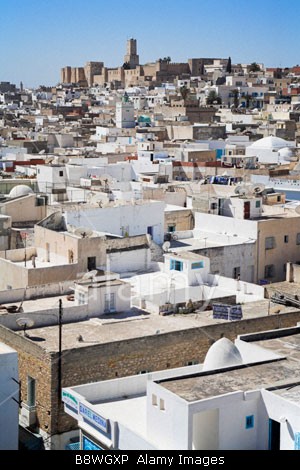