Skip to content
Home » Posts » Action Required, Blog » BLOG: Is it Art Nude or is it glamour – PART 2

Yesterday I posted an image (http://bit.ly/tKAs6g) and asked whether people thought it was an art nude image or a glamour image. I'd like to thank everyone who commented on it. I deliberately chose an image from the shoot that I thought was some where between the two. I wonder if I had picked the image from this post whether more people would have said art nude?

A few things to say about both images – they weren't a pre-planned shots, like many ideas in a shoot it was something that just happened while we were shooting. In yesterday's image I told Katie not to smile as I was trying to get over the idea of isolation and perhaps of loneliness and looking small. For this version we took the concept further and she posed in foetal position. A crumpled flag with a lonely naked (vulnerable) person – a metaphor for the state of our nation perhaps?? I think a smile in the first photo would have changed the image and would definitely have made it a glamour shot.

Just to pick up on +Mark Boadey 's comment, yesterday. I don't believe it is just nude for nude sake. It is true we work working on nude images but I deliberately asked Katie to pose in such a way that everything is hidden. I very much doubt that the idea would have worked if she had been clothed – there are very few outfits that would not clash with the union flag in either pattern or colour or design.

To me the boundaries between different genres are very fluid and sometimes don't exist at all, but I do find it very interesting to hear how people define one genre over another, and I don't think we can apply one rule across the board. For example, to pick-up on what +Stephen Roberts said… I have seen glamour images where the model isn't looking at camera and some very arty nude images where the model is. +Scott Watson : I've heard the "would I hang it on my wall"? definition before but I'm not sure it works. I went to see the Tracy Emin exhibition in London recently – I would call what she has produced as art… but there is no way I would ever hang it on my wall.

If I was pushed to give a distinction between art nude and glamour, I would say that glamour is all about the person and focusing the attention on the model/person making them appear in sexually appealing way. The elements such as the pose, the props and the background of the image are there to support that aim and are secondary to the person. Art nude is about the image as a whole, the individual is a part of that image – but the background, pose and other elements are just as significant and perhaps even more significant to the image. But even that definition breaks down and I can think of images that wouldn't fit with it.

Ultimately I don't believe the labels matter. What matters to me is did I manage to create the image that I set out to create. In this case I believe I did. Will everyone like it? Of course not. It's good when an image provokes a reaction and a debate – photography should make you think. So is it art nude or is it glamour…? I honestly don't know and I honestly don't think it matters.

You can see a lot more from the shoot with Katie here: http://photos.imb.biz/model/shoot/katie2 – but as you might expect please be aware that the album contains nudity. 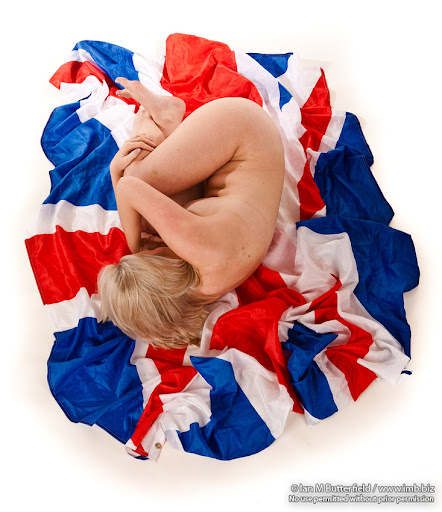