It was Benjamin Disraeli who allegedly said “”There are three kinds of lies: lies, damned lies, and statistics.”  I’m starting to understand how he feels.  I’ve always known that you can twist any survey to give you the results that you want.  I’ve tried hard to avoid that happening with my recent survey.  I thought I’d see how the results of the survey compared with the reality of the last four years of running Friday Night Events at the studio.  And that is where the fun started…

I gathered together the data from every Friday Night at the Studio event that I ran.  Price charged, number of people attended, genre of the event, cost of running the event and profit earned.  My experience over the last year to 18 months tells me that running the Friday Night events is getting harder and harder and it feels as though I am struggling more than ever to make it work.  However the stats just don’t show this – yes it shows dips in numbers in the summer, it shows the last quarter has been bad, it also shows more events are not happening because of lack of bookings.  But bottom line is that general income has been going up, and generally average attendance has been going up.  So why am I struggling to run some events?  I don’t know.

I also thought I would look at which genres of events are the most popular (in terms of average attendance).  Comparing this with the survey results I had some very odd results.  The survey showed that the genre that most people people are interested in is “strobist” techniques.  This scored particularly badly when it came to attendance.  On the other hand when it came to Messy shoots which scored badly on the survey, it came out very high when I looked at attendance levels on a Friday Night.  The same with male model evnets!

Compare this with the interest levels: 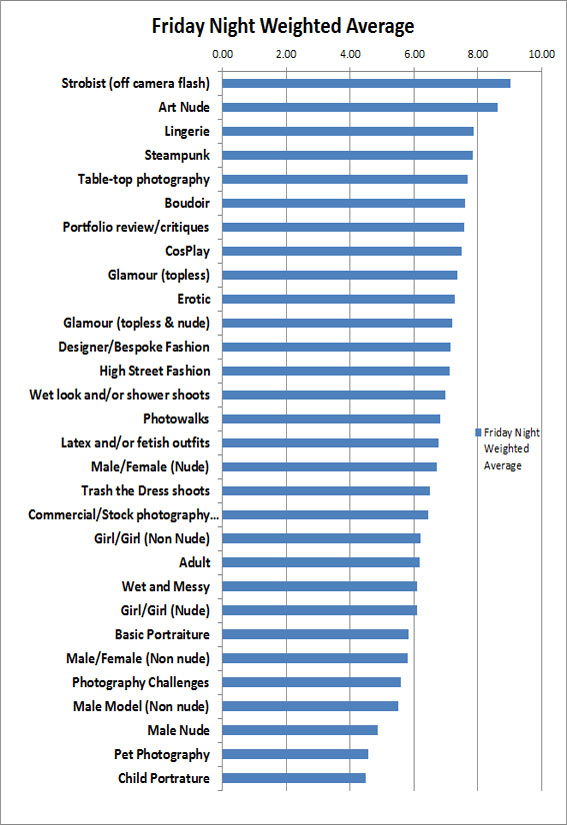 There is a lot more to this than just attendance numbers of course, the real analysis I need to do is obviously going to be to done with the income that the events generate.  And that information for obvious reasons I can’t/won’t be making public.  However… I can say this that there is a direct correlation between average attendance and average profit.

I can’t easily draw conclusions from the analysis I have done this week.  Which is a pity as I was aiming to make changes to my studio offerings based on the conclusions.

If there is anyone out there with either a background in analyzing statistics or with a background in marketing who would like to help me make sense of the figures I’ve got, please get in touch – I am happy to share the full data privately with trusted individuals.