As I am still on my travels, I thought I would do something a little different for my weekly blog/newsletter.  It’s effectively a travelogue with some photography hints and tips.  Please let me know what you think about this blog post, did you find it helpful would you like to see some more from some of the other places I visit on my travels?  Either email me or let me know in the comments section on the website.

So sit back and let me take you on a guided tour round…. 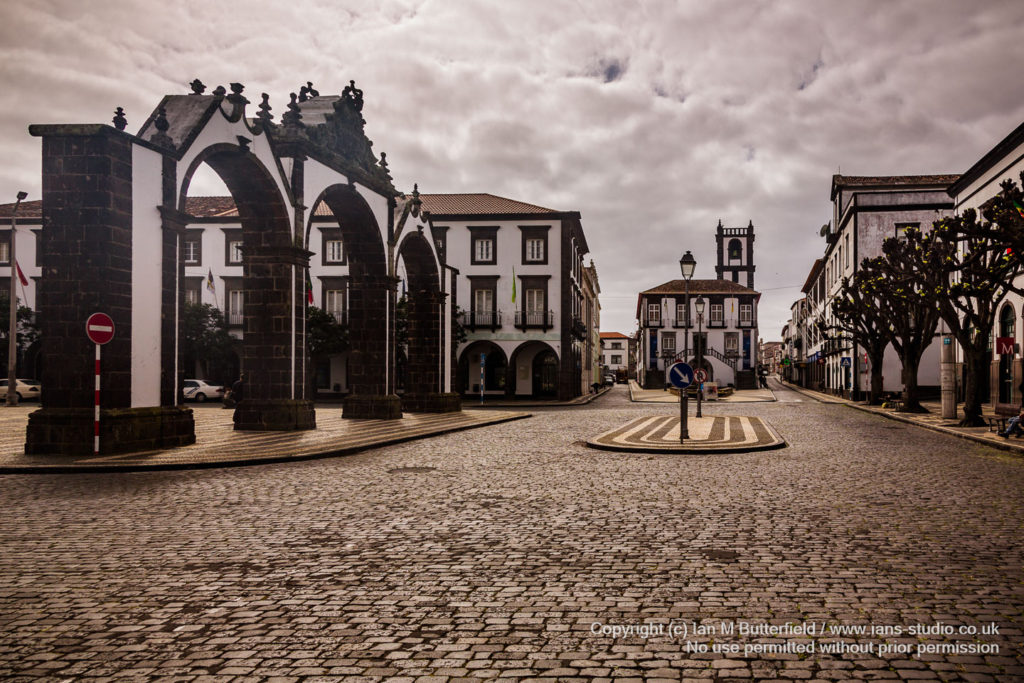 Ponta Delgarda is the capital of the island of Sao Miguel in the Azores.  This was our first port of call on our voyage.  The Marco Polo arrived on Saturday 11th March 2017.  I have been to Ponta Delgarda twice before so my expectations of finding new and interesting things to photograph were pretty low.  All the same after spending an hour or so at a café with internet access uploading blog posts and inspiration sheets I set off.

The first place I came to was the ‘City Gates’ a set of three brown and white arches.  This is the centre of town and the most famous landmark in the town.  I’d photographed the ‘classic view’ of the gates plenty of times before so I wanted to find a different view.  I found this by photographing them from one side looking down the cobbled road that runs parallel to the gates.

In post-production I opted for processing that gives the image an aged look and feel.  I achieved this in Lightroom by reducing the adding split toning effect.  I also added a slight vignette to help draw the viewer into the image.

From here I set off down the cobbled road you can see in the above image.  My expectations of finding much else to photograph weren’t high.  I am please to report that I was wrong.  After walking and exploring for about half an hour I found myself in an wonder piazza. 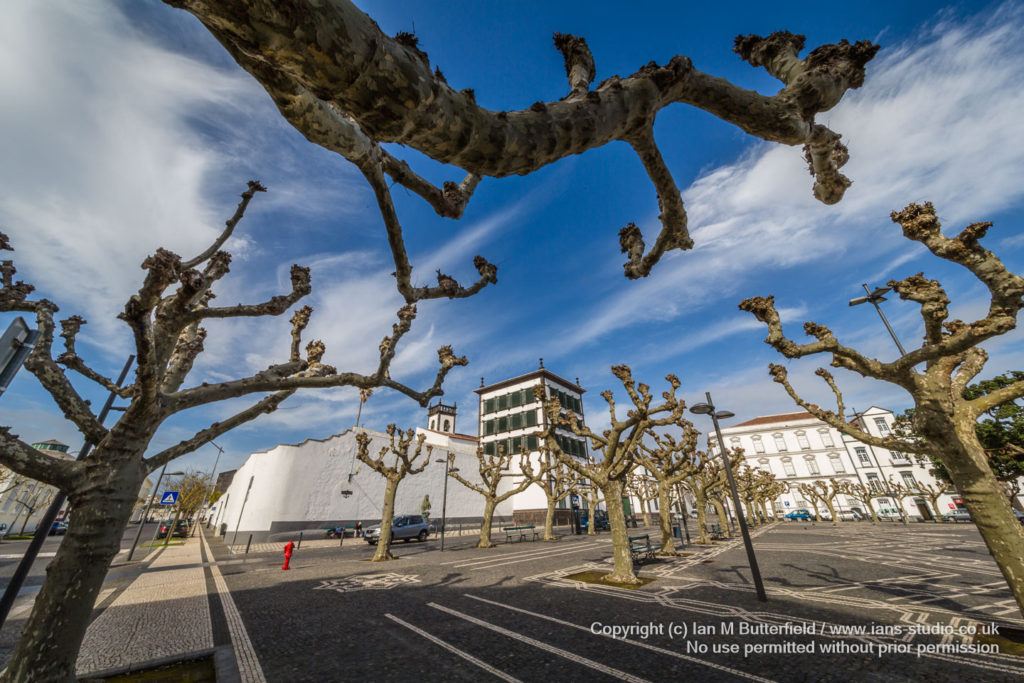 The square was surrounded by interesting looking building of varying architectural style, and also by  a double line of trees, all of which had been pruned back.  The floor was the traditional Portuguese / Azorian black & white mosaic.  In the centre of the square was a bandstand.

Most of the images I created in the square were with my 12-24mm Sigma lens.  For the most part I didn’t need to use the super-wide angles, but I chose to do so because I wanted the images to have a slightly ‘other worldly’ quality to them.

In the above image the extreme wide-angle permitted me to create an image with the trees coming into the frame from all sorts of angles.  In a very strange way we appear to have the trees on the edges of the image framing those in the centre.  The effect is a little unsettling – but I quite like it.

Next I turned my attention to the bandstand.

I tried to create a 360 degree panorama from the middle of the bandstand but as of writing I haven’t been able to stitch the whole thing together.  This is probably due to the fact that all the images were hand held and using my extream wide angle.  So the excessive distortion from that has made it difficult for Lightroom’s panorama algorithms to identify common features between the different images. 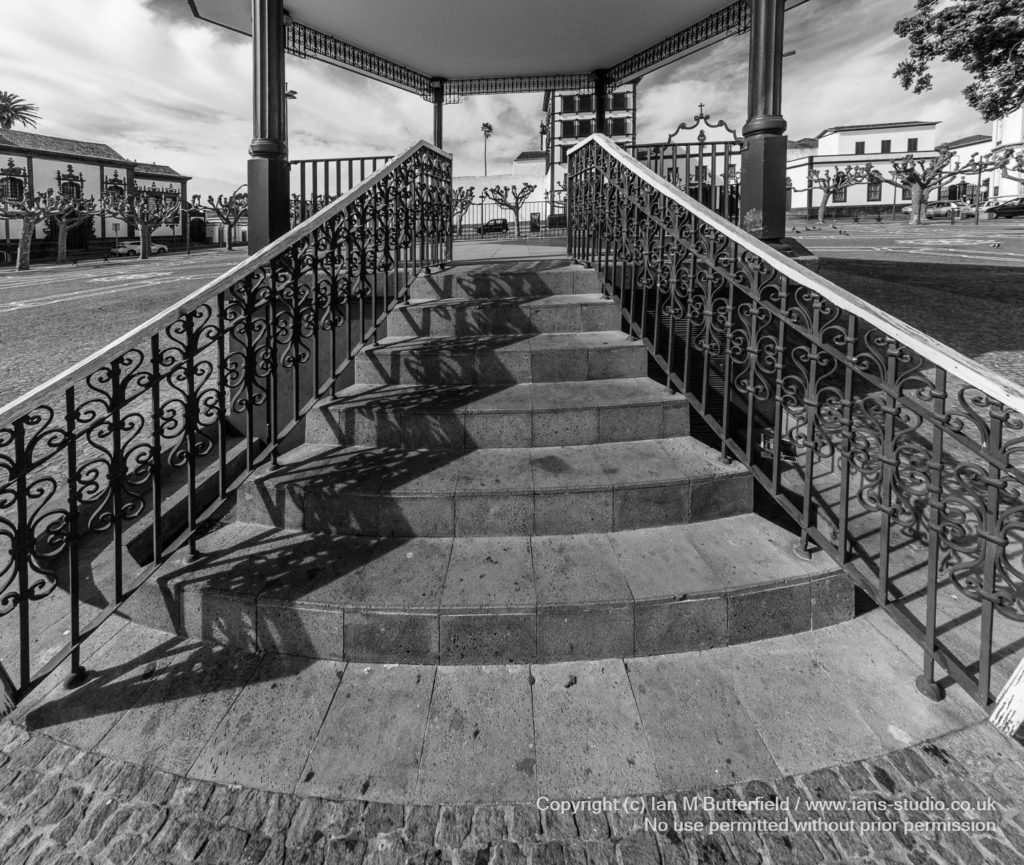 What was considerably more successful was the above image of the steps up to the bandstand.  Again I used the extreme wide angle – image was taken at the 12mm end of the zoom.  In Lightroom I used the ‘upright’ tool to correct the verticals and then crop the image.  Initially I was disappointed not to have got the ends of the railings but on reflection I don’t think this matters and the two sides form excellent lead-in lines.

Converting the image to black and white has allowed me make the image just a little more contrasty and this make more of the shadow from the left-hand handrail.  I am also pleased with the change of texture at the bottom of the image as the smooth stone of the steps changes into the mosaic floor that covers the rest of the square.

Leaving the square I headed in land, in search of an urban park / botanical garden.

There were a number of interesting things to photograph on the way, including some street art and a this little bit of urban decay. 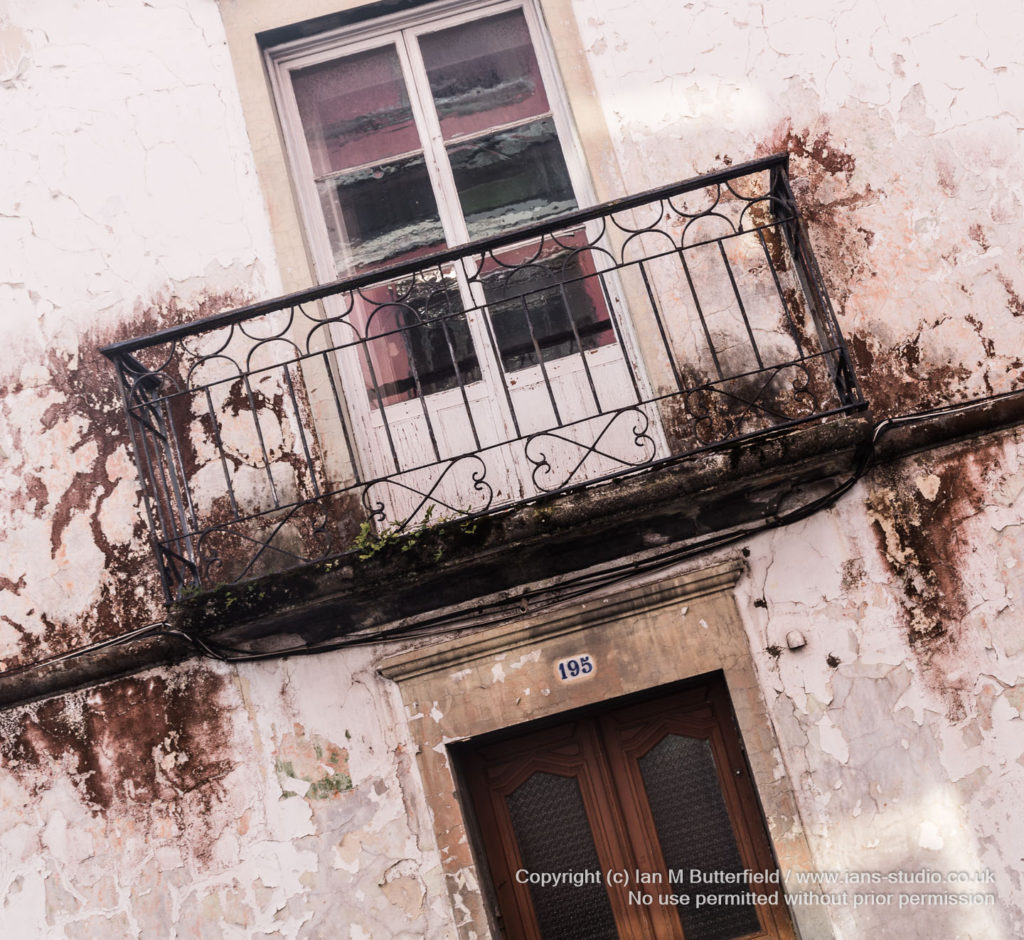 I like the texture of the wall surrounding the balcony and I also liked how all the colours in the setting worked well together.  The colours are all warm, the brown doors, brown rust, a light brown in the door frame complements the pink of the flaking paint and the pink of the curtains behind the upper window.

I tried a couple of compositions for this image but in the end one of my ‘quirky angles’ seemed to be the best way to make the image.

My initial thought was to convert the image to black and white, but as I have mentioned the colours provide a unity that holds all the different elements together and loosing that meant the image was not quite as effective.

In post-production I did bring the clarity slider up to 53 to add a little bit of bite and emphasis to the texture.

Arriving at the park I found two interesting photographic subjects.  The first was some colourful bamboo. 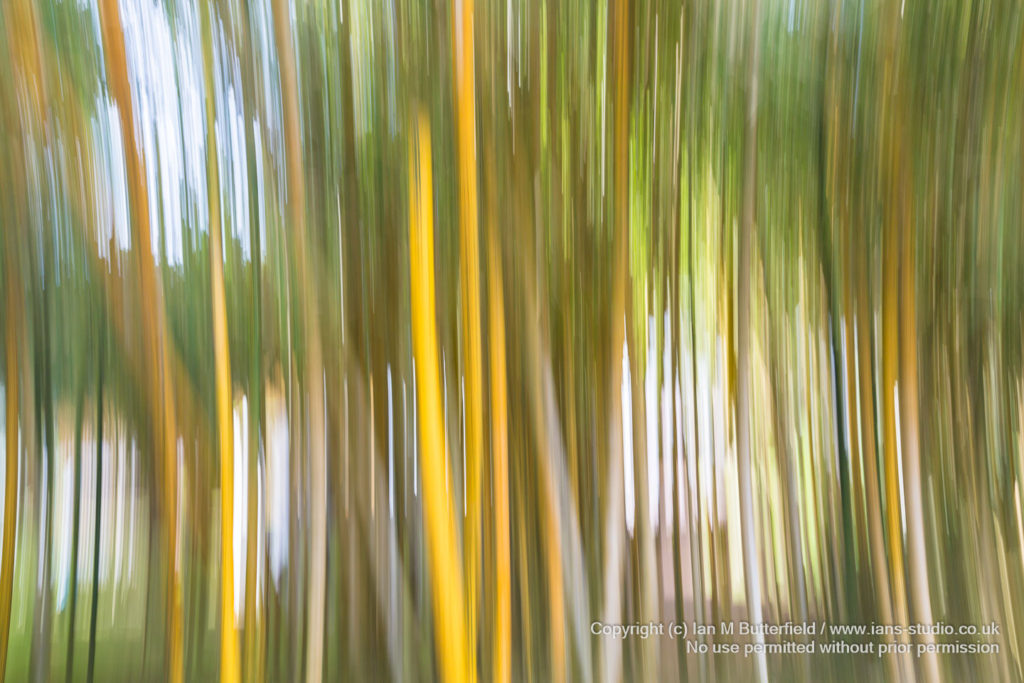 I chose to use a ‘deliberate camera motion’ technique with this subject to create an abstract image.  I selected a shutter speed of 1/15s and focused on the bamboo the pointed the camera a the top of the bamboo and the bowed forward to effectively pan the camera along the length of the bamboo as soon as I started the motion I hit the shutter release so that the camera was in motion for the entirety of the 1/15 Sec exposure.

I find the resulting abstract image quite pleasing to the eye.

If you want to know what the bamboo looked like when it isn’t a being blurred I’ve included an other image below.  This time I held the camera steady. 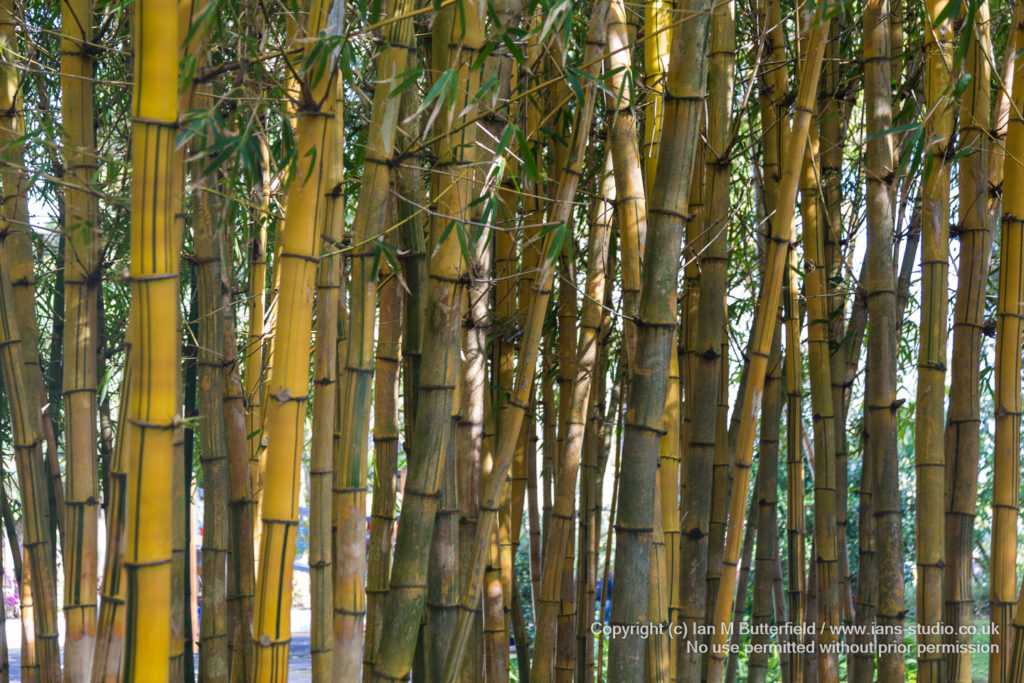 The other challenge in the park was an ancient Australian Fig Tree and it’s incredible root system.  The problem here was that there were areas of deep shadow and areas of very bright light. 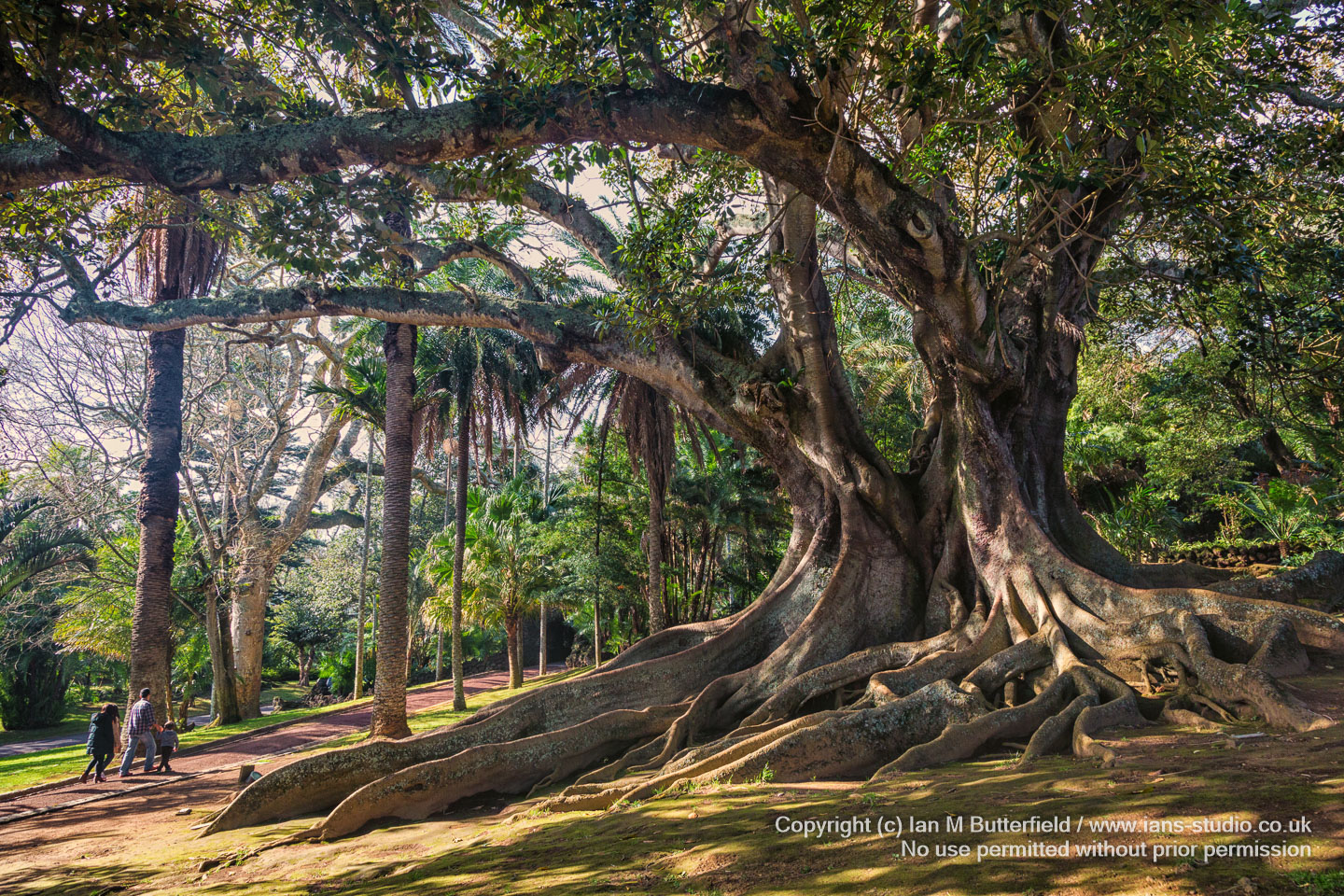 I tried several different techniques including HDR and boosting the shadows in Lightroom.  The above image was the one I am most happy with.  I did boost the shadows a little but much of the post-production work has taken place in Color Efex Pro.  I’ve used the detail extractor to bring out the detail in the shadow area and to boost the saturation a little.

I was pleased to have captured the family walking past on the near-by path.  A combination of them being on a lower path and the distortion effect of my wide angle lens makes them appear much smaller compared to the tree than they would have been if they were stood next to it.  This creates a false sense of scale making the huge tree appear to be even bigger than it was in reality.

The woman on the wall

As I made my way back to ship I came across an interesting mural on a wall:  The black and white art of an elderly woman.  I quite like the fact that it is only the lower part of her face. 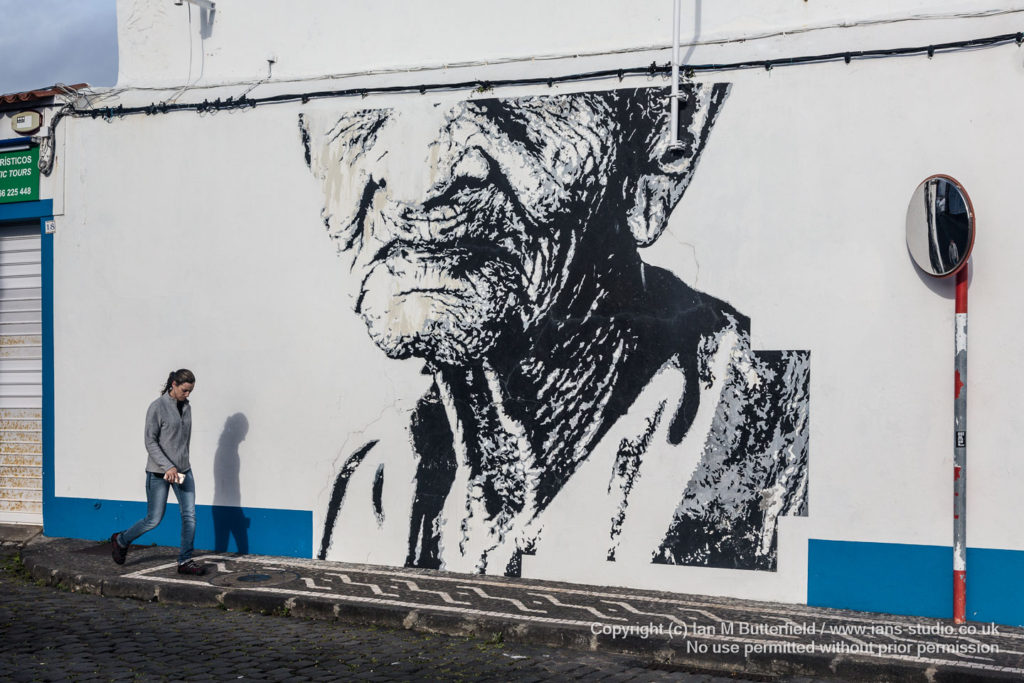 I thought for a little while how I could capture this art work with my camera.  I soon realised that I needed a person in the shot to give a both a sense of scale and to provide contrast to the woman in the art work.  I didn’t have to wait long.

I think the contrast of motion and youth serves the image well.

I hope you have found this travelogue interesting and helpful.  If you would like me to include more travelogues like this in the future please let me know.