This is an image from Friday night's "It's Christmas" shoot at my studio. This shows +Sarah Hobart opening a Christmas present. The effect was achieved by placing a speedlight in the box and firing it with a remote wireless trigger. No other light was used to create this image.

Although I was familiar with the technique it was +Richard Bradbury who suggested setting it up… so some of the credit has to go to him. There was a long debate between the photographers as to how much ambient light was required for the shot. I was keen to use just the light from the box, others added additional light to light the scene. And I even tried a couple of shot like that myself: See: http://photos.imb.biz/model/shoot/sarahrachaelchristmas/ha6343c2#ha6343c2

For the reset of the images from the evening please take a look here:
http://photos.imb.biz/model/shoot/sarahrachaelchristmas
but please note that the last couple of shots in the album contain some topless nudity. 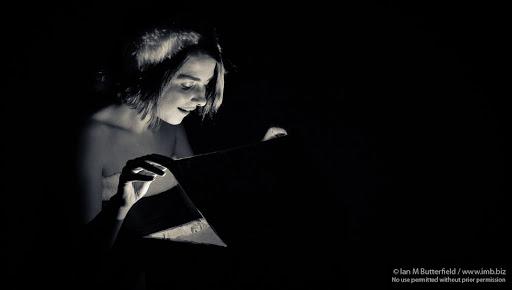