As you know I am off on a five-week epic voyage to the Caribbean, Mexico and Cuba.  I am actually writing this blog from my cabin on the MV Marco Polo.  While my main reason for being here is to lecture on board ship, I am, of course also going to be doing a lot of photography at the places we visit.  To I thought this would be a good opportunity to talk about…

What’s in the bag? 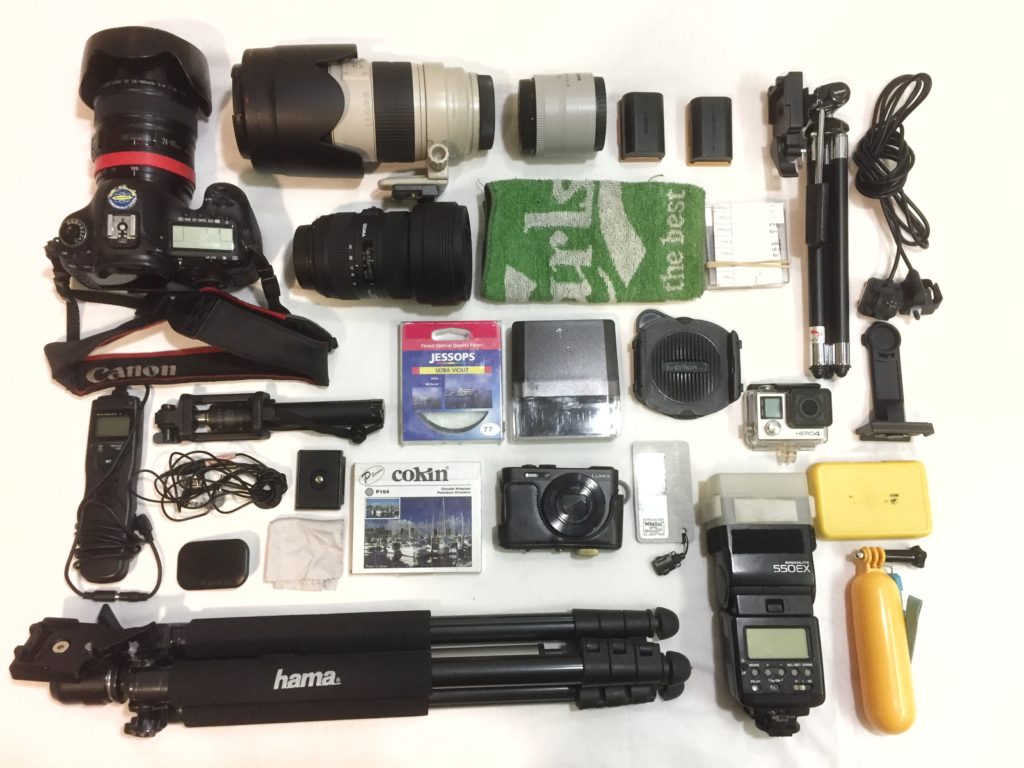 I have four very different cameras with me.

First of all there is my trusty Canon 5D Mk III DSLR – this is my ‘work horse’ camera and the camera I will be using most during the trip.  I have three lenses for it.  The trusty 24-105mm f/4 IS lens, that lives on the camera body.  Wide angle images are favourite of mine when doing travel photography and 24mm is often not wide enough for me, even on a full frame body.  So I’ve brought a Sigma 12 – 24mm f/4.5-5.6 wide angle zoom.  I’m trying to improve my wildlife photography skills so I have the Canon 70-200mm f/2.8 IS Mk II lens with me, this isn’t quite long enough for a lot of wildlife work so I have the Canon 2x converter for it, which will effectively give me up to 400mm but with the loss of 2 stops of light giving me a maximum aperture of f5.6 when the aperture is attached.  The convert only works with the 70-200mm lens, this isn’t a problem as there isn’t really any situation that I would want to use it on either of the other two lenses.

My second camera is a Panasonic Lumix LF1 compact camera.  Although it is small it does shoot in RAW format and has full manual control.  I’ve brought this as my backup camera instead of a second canon body, while I would be gutted if the Canon 5D Mk III failed, switching to the compact camera would be no bad thing as I do need to get images with it so that I can put together training materials on getting the best out of a compact camera.  My biggest problem is remembering to get it out and shoot with it instead of shooting everything on the 5D.

The third camera is my little GoPro 4 silver – I bought this so that I could still take stills and video while taking part in water based activities.  While I have occasionally used it for other situations the bright yellow floating handle is the most common attachment I put on it.

The fourth and final camera is a bit of a cheat really – it’s the camera on my iPhone.  It is important not to dismiss this camera.  The say the best camera is the one you have with you, and I always have my iPhone with me.  Not only do I use it to record the video portions of my travelogues but last year I used the panorama function to make a stunning image of a Caribbean rainbow.

Tripods and other supports

I have two tripods with me, the first is my trusty Hama Traveller Pro, I’ve replaced the head on it with a 3rd-party head that takes the standard Manfrotto quick release plates.  I’ve standardised all my tripod heads to take these plates so that I don’t have to keep changing the plates on the my gear.

I don’t always carry the Hama tripod with me – on then I think I might need it.  So for other occasions I take a Velbron mini tripod, on which I have added a 3rd-party Manfrotto quick release adaptor.  This little tripod is reasonably stable when it is not extended but when the legs are pulled out to 1m / 3ft it is very wobbly.  However, a wobbly tripod is better than no tripod especially if I use mirror lock-up and a remote release.  It is worth noting that my remote release is a third party cabled one, which will also has intervalometer capabilities for when I want to do timelapse photography.

Also in the bag is one spare Manfrotto quick release plate, a tripod adaptor for my iPhone, and selfie stick which I use when recording travelogues on the iPhone.

I typically leave one speedlight in the camera bag.  It varies as to which one, but it is often my Canon 550ex which has a Stofen diffuser fitted.  I also carry a 3m TTL cable so that I can use the speedlight quickly and easily off camera, the cable has an adaptor fitted so that I can easily attach the speedlight to either of the tripods.

I carry Cokin P filter holder and the 72mm adaptor so that I can attach it to either my 24-105mm, or my 70-200mm lens.  To go in this I have a set of ND filters (1, 2 & 4 stops), a 2 stop ND grad filter and a circular polarising filter.  I also have a 72mm UV filiter which I only use if I am in very dusty or sandy conditions.  I don’t leave UV filters on my lenses to ‘protect’ them as I prefer to be careful than risk making the images a little softer.

As you might expect I also carry a cleaning cloth, spare batteries and spare memory cards.  Note that I have a bright yellow case for the memory cards to make it easier to find in the bag or if it is dropped.

My trusty bar towel camera cover is in the bag to protect the camera in case of rain.  I also carry a whibal grey card if I find I photographing anything that I particularly want to get the colours right for.  There is an external clip-on mic for use with the iPhone for recording travelogues. I also have a Pulse remote trigger which permits me to control the 5D from my iPhone.

Finally, just for fun I have a ‘pin-hole’ adaptor which permits me to do pin hole photography with the 5D.

So until next time, keep MAKING great images,
Ian.

PS.  The release schedule of the blog for the next five weeks will be dependant on when and where I can get internet access!