After the recent global cyber-attack and businesses having their data held to ransom, I thought this might be a good time to talk about backups again.

I have previously done a blog post about backups when travelling – see my post from 11 March 2017.  This time I want to talk about backup strategies for your images on your main system.

I’m not going to go through all the different ways that data could be backed up.  I guess we all have different strategies.  Instead I want to talk about the strategy that I use and the reasons behind it.  I’m sure my strategy isn’t perfect but I do believe it is pretty robust.

My computer set up.

Let’s start by describing my computer set-up.  I have recently ditched my desktop in favour of using my laptop for everything.  That’s not such big change as it might sound.  I kept all my data on external disk drives (more about that later) and purchased a docking station so I can still have three monitors attached to the laptop when at home.  (I should be able to drive 4 monitors and still have the laptop screen but there is an incompatibility between my docking station and one of my monitors).   So it’s three monitors and the laptop screen – for now.

Since the move over to using the laptop – I now keep all my essential data on the internal disk on the laptop.  This is the data that I want to have with me when I am ‘on the road’ things like business documents, accounts and my creative writing.  I also have my Lightroom catalog on that same disk, but NOT the image files.  Any images that I may possibly want to work on while away from home I have had Ligthroom create smart previews so that I don’t need the actual images to be with me when not at home. 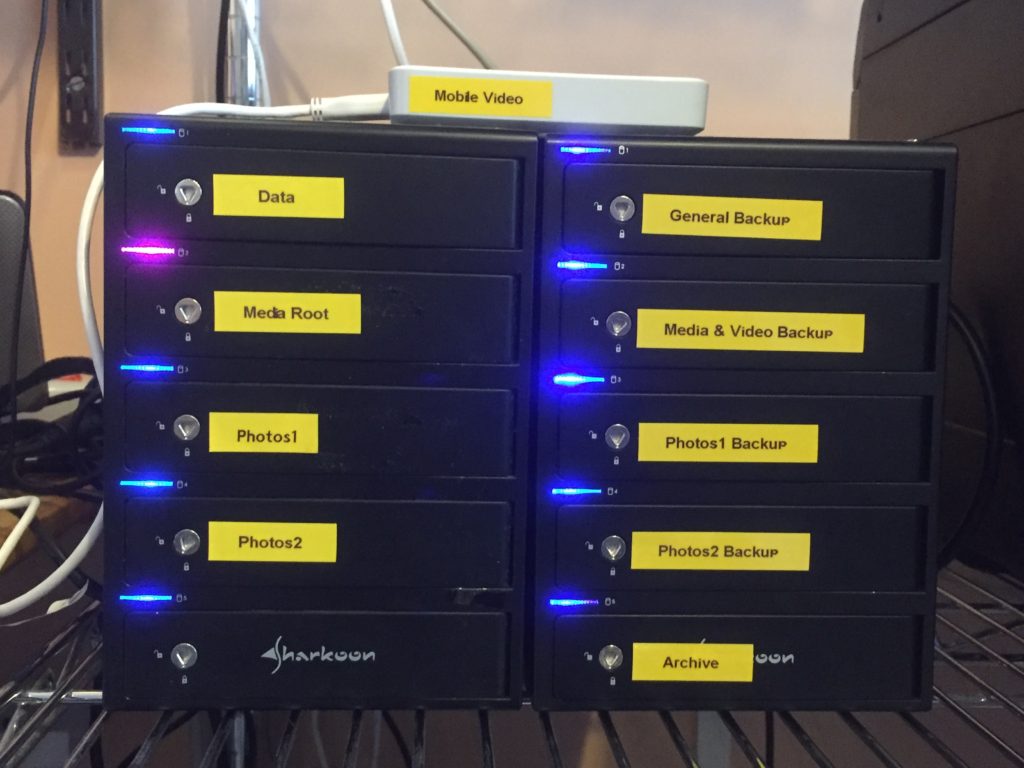 Apart from the ‘essential documents’ that I’ve mentioned all the rest of my data is stored on external disks.  I have two 5-bay Sharkoon disk arrays.  While they are capable of running RAID or mirroring, I used the in JBOD (just a bunch of disks) mode.

Each disk can be easily ejected by just opening the bay door.  At the time of writing, I am using 9 out of 10 of the available slots.

The array with the 4 slots in use has all my ‘live’ data on it – documents, images and some videos .  The array with 5 disks in it is for back my backups.

There is one additional disk I need to mention.  It is a 2Tb 2.5in external disk.  This contains all my recent video files for VideoCasts, Travelogues etc.  The reason I keep this on a separate external drive rather than just putting an extra disk in the vacant slot is because video editing is one of those tasks I may wish to do when I am away from home.  Thus I need to have the video files on a disk that I can easily take with me.

A quick note for the techies who are familiar with the idea of RAID, which is supposed to be a way of storing data across multiple disks with enough redundancy such that if any one disk fails the data of the remaining disks can be used to rebuild the missing one.

Before becoming a photographer I worked in IT – we used to use RAID arrays for data storage.  But RAID has a number of problems.  For example, when one disk fails a greater strain is placed on the remaining disks and occasionally that extra strain can cause on of the remaining disk to also fail – thus meaning you have lost ALL your data.

With RAID 1 (A pair of mirrored disks) I have seen the surviving disk fail to work when it is used independently ofthe mirror. 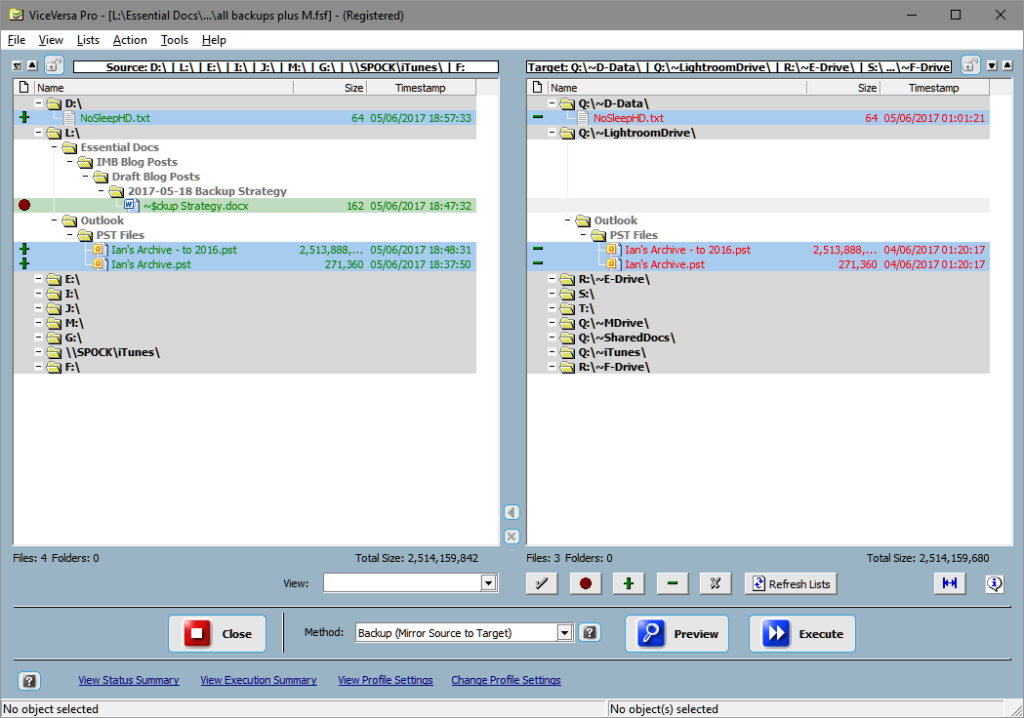 The traditional way of backing up data – just copying all the files to a backup archive just won’t work when the total capacity of your live data disks is 11.5Tb  (Incidentally this is also the reason why I don’t use on-line backup services.  Can you imagine how long it wold take that amount of data to upload to or download from the cloud?)

The backup solution I use is a program call ViceVersa Pro (http://www.tgrmn.com/)  ViceVersa is effectively a file synchronisation and file replications program.  What is does is look at my live disk, compares it to corresponding backup disk – and if anything has changed on the live disk it copies it over to the backup.

What I really like about ViceVersa is that if a file is going to be overwritten in the backup or deleted from the backup (because it has been deleted on the live disk), ViceVersa first moves it to an archive location, and will keep it there for a specified amount of time, and it will keep a specified number of versions of the file too.  In my case, I have this set to three months and three versions.

It is possible to automate/schedule the running of ViceVersa by using VVEngine (another product from Tgrmn).  I used to do this but now prefer to have ViceVersa run at times that are convenient to me.  Such as overnight or over lunch so instead I just start the process manually.

On my iPad I have a regular reminder come up every three days to prompt me to run the backups if I haven’t already done so.

This means if an entire disk fails, the maximum amount of data I can lose is three days.

Having regular and up to date backups is only part of the story.  The classic mistake is that someone’s home is broken into and the computer is stolen.  “Did you have backups” “Yes, but they stole those too”.  Or God forbid, the building is destroyed and your backups are lost alongside the computer.

This is why I have a duplicate set of backup disks.  Every three months (and often more frequently) I eject all the backup drives from the Sharkoon array, put them in anti-static bags place them in a box and then swap them for the duplicate set that I have stored at my mum’s home.

This means that in the case of a major disaster (losing my entire system at home) the maximum amount of data I can lose is three months.

You may not need as an elaborate backup plan as I have.  You may already have your own plan in place.  If you don’t please set aside some time to think through what you need.  The amount/level of backup you require depends on the answer to one question.  What can I afford to lose?