I don’t do a lot of ‘street photography’  just photographing people in the street, it has never been something that I have been totally comfortable doing.  Last year (13 June 2017) I posted a blog post all about the ethics of doing street photography and explaining why I am often uncomfortable doing it.  You may wish to have a read of that blog post if this subject interests you.  I’m not going to go over the same ground in this blog post.  Instead, I am going to share with you a number of street photography images that I created on the first half of my current cruise on the MV Magellan and the stories behind them.

Those who have read my June 2017 blog post will know that privacy and consent are important to me, so for each of these images I’m going to talk you through how I dealt with that. 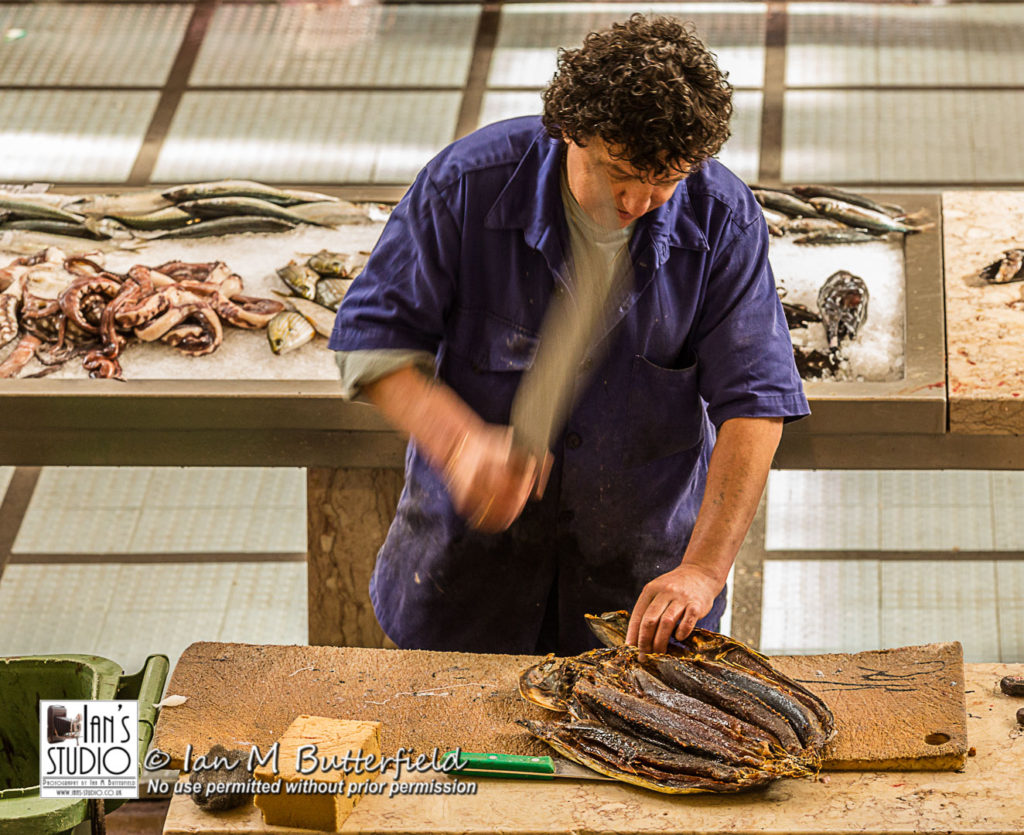 This image was created during our visit to Funchal in Madeira.  The fish market and produce market is one the big tourist attractions in the town.  It is possible to view the fish sellers at work from a balcony where you can watch and photograph them.  I have visited this market many times in the past and know that the traders there are used to tourists photographing them.  I have never had anyone object to being photographed.  In fact the nearest I have ever had to an objection was a man who appeared slightly annoyed at being distracted from his work by my asking for permission.

With all that knowledge and bearing in mind that I was shooting some distance away on the balcony, I didn’t explicitly ask permission to make this image, and was confident that had I asked that permission would have been granted. 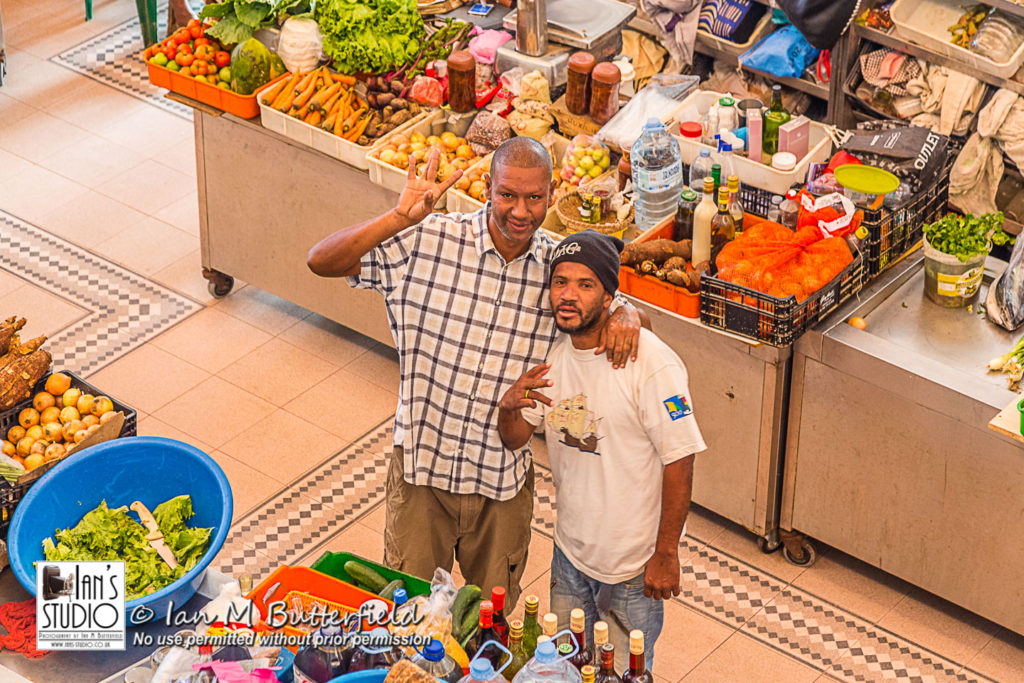 This was another port, another market and another balcony.  This in Mindelo in Cape Verde, I was looking down on the market looking for potential images when I became aware that these two guys had seen me with my camera and it’s beige 70-200mm lens.

I waited to see what their reaction was going to be, I wasn’t specifically looking to shoot people but as they started posing for the camera, I decided that it would be good to make shot, smile and give them a thumbs up gesture. 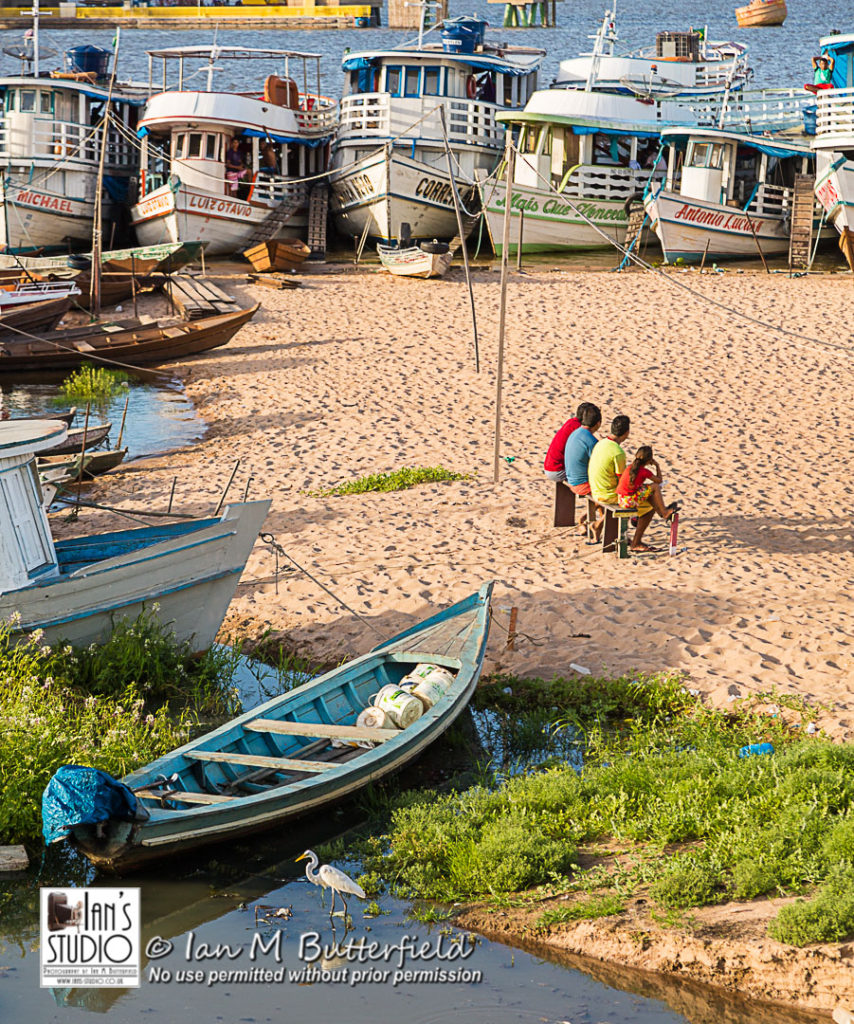 Boats on the waterfront in Santarem, Brazil

In Santarem, half-way up the Amazon in Brazil, I spotted this group of people sitting on a bench on a riverside beach surrounded by various boats.  I was attracted to them photographically because of the solid colours of their t-shirts.

As you can probably tell, I was clearly too far away to ask permission and additionally, they are all facing away from the camera, so I didn’t feel as though I was invading their privacy by making the image.

What makes the image work for me is the fact that although they are the subject of the image they are quite small in the frame.  I also like the detail of the egret in the bottom of the image. 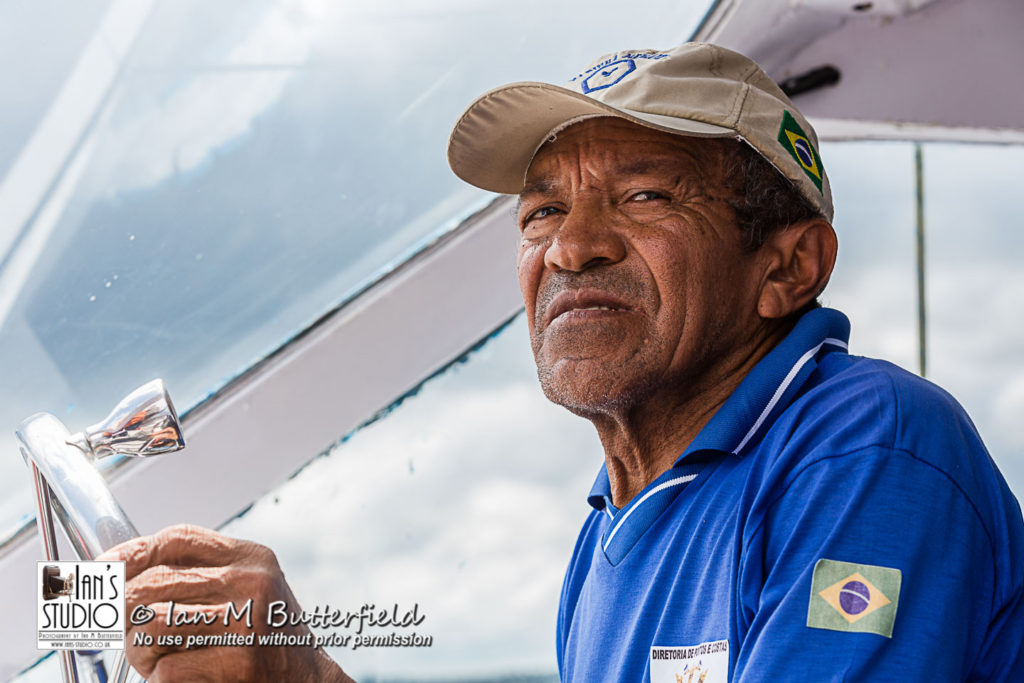 On our second day in Manaus, I was escorting a trek in the Amazon jungle.  To get to and from the start point we were on a medium sized river cruiser.  This is a portrait of the captain.  The image was made on our return journey.  I confess that I didn’t explicitly ask his permission to photograph him.  There were a couple of reasons for this.  Firstly, really didn’t want to distract him while he was piloting the boat, secondly, I was close by and took my time getting ready to make the image, I was obvious what I was doing and I was closely watching his body language for any signs that my camera was making him uncomfortable.

With hindsight, I think I probably should have found some way to politely ask, but the image I have presented here is the last of three taken at short intervals, and there was no indication that my photography was upsetting him.  The slight scowl on his face is actually his concentrating on his job and he had the same expression even when I wasn’t pointing a camera at him. 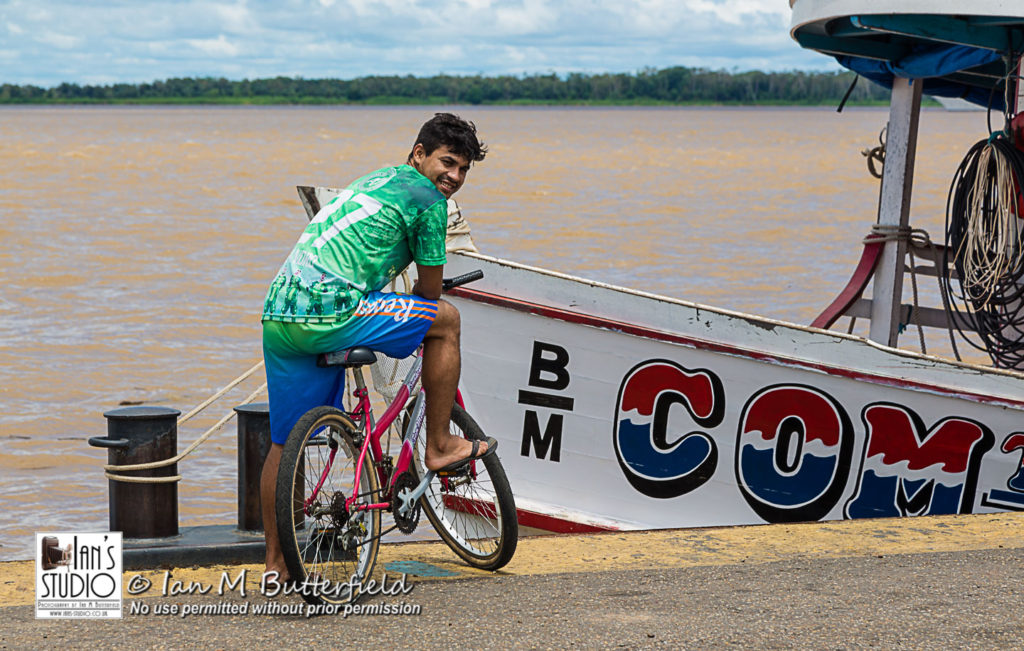 We had just come ashore at Parintins when this young man cycled up to quayside and stopped. I could see him looking in my direction and he spotted the camera in my hand.  I gestured to the camera and then back to him to indicate that I would like to photograph him.  He nodded and smiled.  It was a very short conversation with no words being exchanged but the question and answer were both clearly understood. 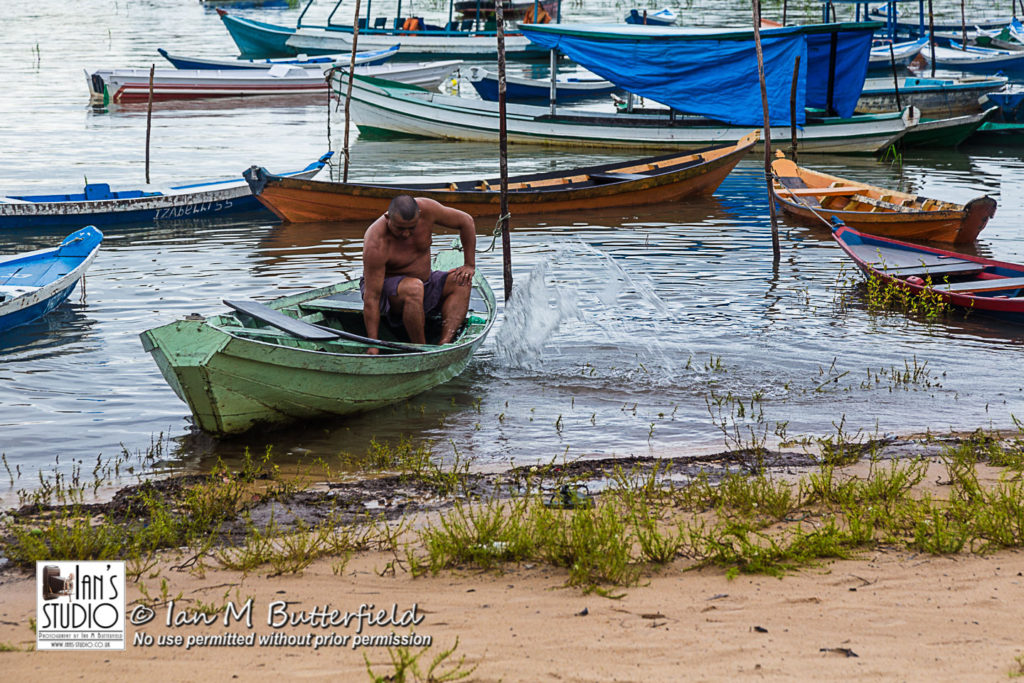 The following day we were in Alter do Chao.  I was on one of the early tender boats and I arrived in the town in torrential rain that had been going on for quite some time.  It didn’t take long for the rain to stop and I soon found an area of small boats that I wanted to photograph.  Among the boats was one man bailing out the rain water from his vessel.

I didn’t ask his permission to photograph him.  The reason I didn’t on this occasion was that I was not the only photographer in this location, the ship’s resident photography team were also there.  What you cannot see in my image is a member of that team just out of frame videoing the bail out process.

Given that he was clearly comfortable with them videoing and photographing him, I didn’t feel I need to ask his permission.  Additionally, interrupting him to do so would have spoiled their video. 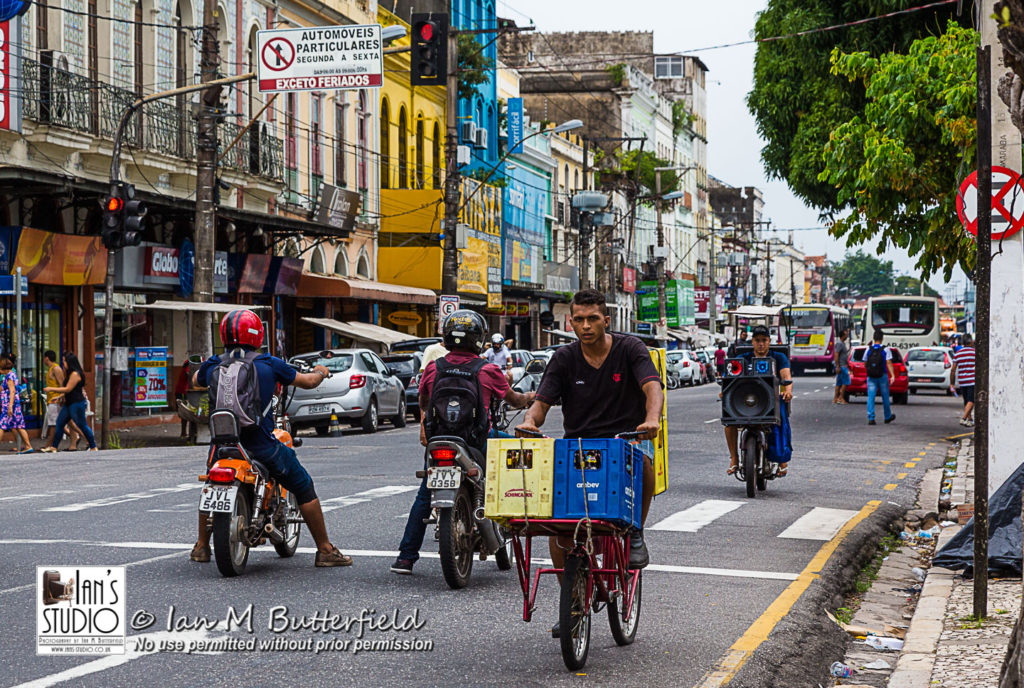 This image comes from our last day in Brazil and our visit to Belem.  Here you can see three motorbikes and one cyclist.  For me, this image clearly fits into the category of being a public location where it is not possible to obtain permission from the people involved.

Had anyone in this scene waved a hand to indicate that they didn’t want to be photographed, I would, of course, have not made the image. 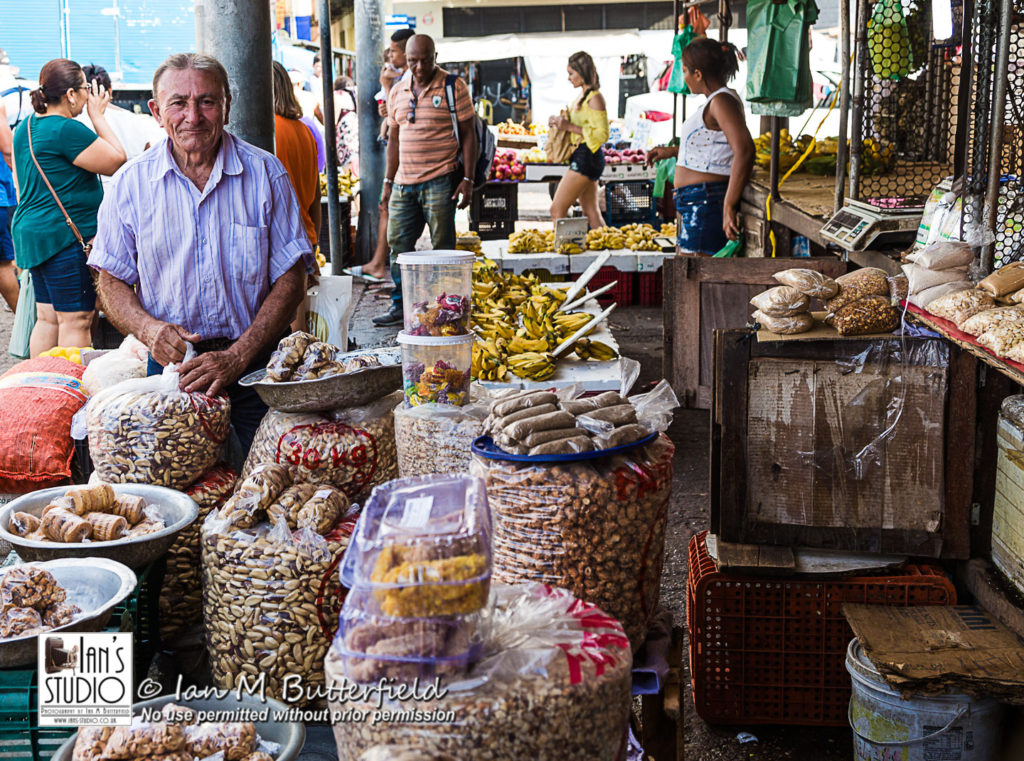 My final image in this blog also comes from Belem and this is yet another approach for making images of people on the streets.  I had just purchased some Brazil nuts from this market stall and as I was leaving I indicated to the trader that I would like to photograph him, and he politely posed as made a couple of image of him in this busy market.

I hope you can see from this blog the different ways in which I obtained consent for photographing these people.  If you find any of the techniques and approaches helpful to your own street or travel photography please let me know.